Starting a new ‘Weekly Award’ feature on the blog where I give out ‘awards’ such as best player of the week, most memorable quote of the week and best meme-worthy reaction of the week as a round-up post for all the tennis action in the entire week. The 2019 season has been a pretty wacky one already so read on to see who gets the accolades for this week…

BEST PLAYER OF THE WEEK

Down a set and 0-3 down against Tatjana Maria in the first round in Shenzhen, it looked like Aryna Sabalenka was about to join the slew of seeded players that had exited in the first rounds. However, the fighting spirit in her shone once again and since then, only dropped one more set enroute to the title. Sabalenka defeated Ekaterina Alexandrova, Maria Sharapova, Wang Yafan and Alison Riske for her third WTA title. Sabalenka played absolutely stunning tennis in the final, smashing 37 winners to just 26 unforced errors to fend off an inspired, Riske. If she continues this kind of form, she’s absolutely going to be winning bigger titles in the future.

SURPRISE PACKAGE OF THE WEEK

Beating World No.3 Caroline Wozniacki for the first time? Pretty good. Defeating the legendary Venus Williams? Great too. But beating both of them back-to-back to reach your first career final? Even better! This was what 18-year-old Bianca Andreescu achieved in Auckland this week. She was even one set away from her first ever WTA title against Julia Goerges, but eventually ran out of steam in the end. The girl seems to have every shot in the book and if she can harness all these weapons together, she’s definitely going to be one to look out for in the future.

BIGGEST UPSET OF THE WEEK 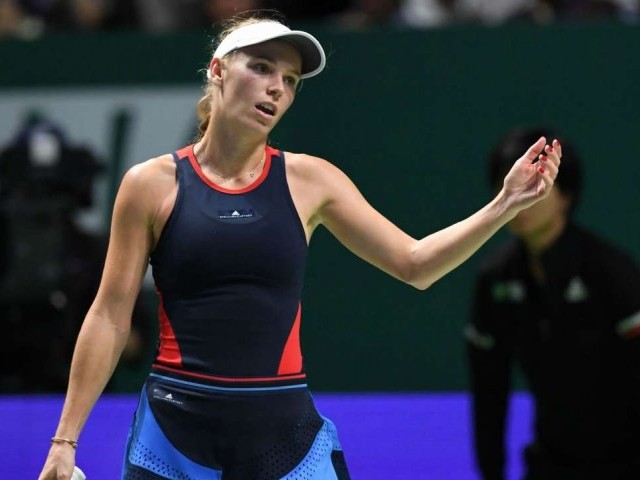 As aforementioned above, Andreescu beat Wozniacki enroute to the final and it was her first loss to a player outside of the world’s top 150 since 2013 Wimbledon. While Andreescu deserves all the credit in the world for holding her own against the World No.3, it was a terribly disappointing performance for Wozniacki who was miles behind the baseline for the majority of the match and was just waiting for errors from the Canadian. I have no idea if it’s the rheumatoid arthritis affecting her but nonetheless, this is not good preparations for the Dane heading into the Australian Open where she will be defending a Grand Slam title for the first time in her career.

BIGGEST DISAPPOINTMENT OF THE WEEK Monica Niculescu’s infamous forehand slice and buckets of variety was always going to be a tough ask for the erratic and hard-hitting Jelena Ostapenko, but the shocking thing in Niculescu’s victory over Ostapenko was that she didn’t even need to harness that variety. Niculescu barely even needed to hit a slice as Ostapenko was hitting balls miles out, wide and into the back fence. The serve looked as shaky as usual and Ostapenko was just an error machine throughout the entire match. The Latvian lost 0-6, 2-6 to Niculescu and just won four points in the first set!!!!!!!! Frankly, I think it’s the worst performance I’ve ever seen in my tennis watching experiences…

BEST MATCH OF THE WEEK

It’s unfortunate this match went under the radar because this Shenzhen final between Sabalenka and Riske is already a contender for final of the year! Riske was playing absolutely stunning tennis in the first set – Sabalenka didn’t do a lot wrong, but Riske was effortlessly moving Sabalenka from side to side with loads of angles and powerful down the line shots. Riske continued this form early on in the second but Sabalenka slowly started to find her way into the match with more accurate serving and hitting. Riske was down 2-5, but showed her fight and grit to force the set into the tiebreak, though it unforunately wasn’t enough. The American continued to fight in the third set but Sabalenka was way too much for her with heavy hitting and stunning groundstrokes. A very high quality final from two supremely gutsy fighters.

BEST POINT/SHOT OF THE WEEK

What a match. What a shot. What a week it was in Hopman Cup. Angelique Kerber was a perfect 4-0 in singles this week in Perth and she showed how she did that with the wheels she produced to hit this around the net post winner in the mixed doubles against Switzerland. The mixed doubles throughout this week were really fun and it’s such a shame that this year will probably be the last edition of the Hopman Cup. Whoever wants to remove Hopman Cup from the tennis calendar, screw you…

MOST MEME-WORTHY REACTION OF THE WEEK

BEST GIF OF THE WEEK

Venus Williams is usually pretty conservative in her post-match conferences but she produced two great on court interviews in Auckland after defeating Victoria Azarenka and Lauren Davis. The interview asked Williams how she’s always so calm on court, so Venus showed how she does her poker face in this epic gif…

MOST MEMORABLE QUOTE(S) OF THE WEEK

Kerber’s friendship with Alexander Zverev was on show during the Hopman Cup and the left-handed German produced a bucket load of memorable quotes burning her partner this week. “Always the same” she said when Zverev was late for the mixed doubles. Kerber also said that her new year’s resolution was for Sascha to “be on time”. And she also prefers quokka to Sascha. We love you, Angie!

"I take the quokka. Sorry Sascha!"

BEST ON COURT INTERVIEW OF THE WEEK

Aliaksandra Sasnovich’s a fan of Brisbane and she always seems to produce good tennis in Australia. Her secret to doing so? Probably mushroom risotto. A tight contest between Sasnovich and Venus for this category, but the former barely snatches this category because fooooodddddd.

Sasnovich: “Hi everyone. To be honest, Australia is my favorite country & you are my favorite public. Today was a really tough match. Last year I ate too much risotto w/ mushrooms before the match & this time I didn’t. I changed my food plan.”

Sasnovich avenges herself on Svitolina after last year's defeat in the @BrisbaneTennis final – but what did she eat before the match in 2018?#BrisbaneTennis pic.twitter.com/66MX4iSPih