The fourth Premier 5 tournament – the Western and Southern Open in Cincinnati’s draw is out. It’s a similar line-up to Toronto, but there is definitely plenty of intrigue in the draw. Let’s break it down…

*Note: the preview was done before Maria Sharapova’s withdrawal. The preview will be changed once the updated draw is out.*

They could face each other once again in a rematch of the Rogers Cup quarterfinals – if Karolina Pliskova and Caroline Wozniacki win their first two matches. 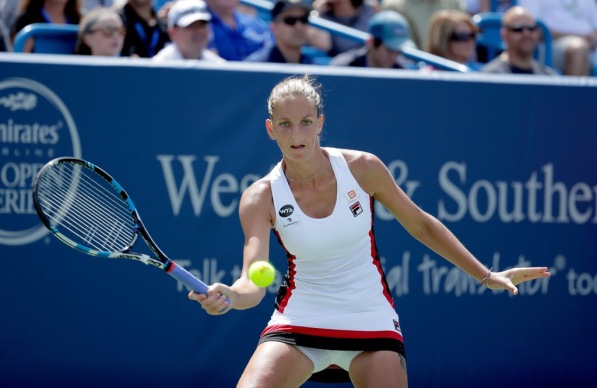 Cincinnati was where Karolina Pliskova started her meteoric rise up the rankings – ranked No.17 last year, Pliskova stormed to the title by beating Svetlana Kuznetsova, Garbine Muguruza and Angelique Kerber. Now it’s a totally different situation coming to defend her title and with the No.1 ranking – can she defend those points and continue to hold her position at the top for another week? The Czech kicks off her title defense against a qualifier, then either friends Daria Gavrilova or Kristina Mladenovic. Mladenovic is 7-6 on the season since the French Open and has been looking lethargic on court since. If Gavrilova does proceed into round 3 to face Pliskova, the Czech has a 3-0 head to head record against her.

As of writing, Caroline Wozniacki is in the Rogers Cup semifinals and she could potentially proceed further as she faces Sloane Stephens next. Fitness may be a factor, but with Wozniacki, she is arguably one of the most fittest players on tour so she definitely still can make a deep run in Cincinnati. Wozniacki has a tough opener in either Caroline Garcia or Elena Vesnina, before potentially facing Venus Williams. Williams looked fatigued in Toronto and the serve was not helping her at all – the faster conditions in Cincinnati may suit her better though. Venus faces Alison Riske in round 1 (fun stat: Williams has a 115-38 record against fellow Americans – the only Americans to have beat her since 2006 are Serena Williams, Madison Keys and Sloane Stephens).

*Note: Sharapova’s position is replaced by a lucky loser.*

A potential face off between Garbine Muguruza and Svetlana Kuznetsova could happen – the former leads the head to head 4-1.

This quarter of the draw is suuuuper fun! Let’s talk about Garbine Muguurza later – but first let me admire the match-up of Madison Keys-CoCo Vandeweghe in a rematch of the Stanford final. Keys edged the final in two high-quality sets (highlights on WTA’s YouTube channel HERE) and I’m really excited to see that one. The winner of that match will face a qualifier or Daria Kasatkina (check out the qualifying draw if you haven’t – it’s dope). Muguruza kicks off her Cincinnati campaign against Lauren Davis whose season has died down after an impressive start to the year. 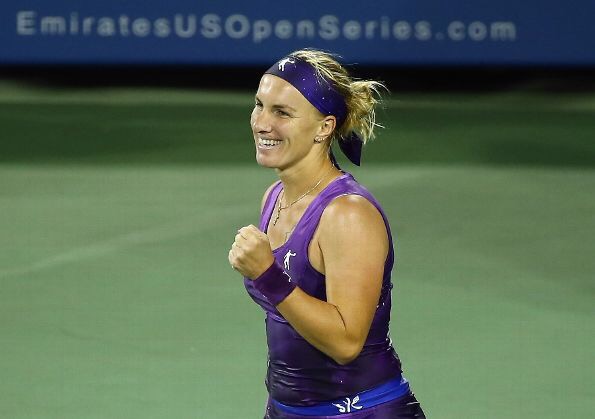 As the season comes to a close Svetlana Kuznetsova will want to gain more points ahead of the last stretch of the season as she is sitting at No.9 in the Race to Singapore. The Russian suffered an opening round loss to Catherine Bellis in which was her first opening round loss since last year in Eastbourne. After a bye, Kuznetsova’s first match would be against Yulia Putintseva or a qualifier. She is seeded to face Jelena Ostapenko in the round of 16, who is now playing a lucky loser instead of Maria Sharapova.

Angelique Kerber’s slump has been one of the most strangest stories of 2017. Since playing in her first tournament (at Wuhan last year) as No.1 in the world, Kerber has amassed a 34-20 record, and has only reached two finals in this time span (Singapore Monterrey). With the pressure of the No.1 status away from her, some expected Kerber’s form to improve but it has seemingly not been so during her showing at the Rogers Cup. The German fell to Sloane Stephens in a horrible performance and she is in a race against time to defend the points she gained last year before she is set to tumble down the rankings. Once Kerber’s points from the US Open are removed, she will definitely drop out of the Top 10. She will be desperate to get some wins but her draw isn’t helping her as she could face the in-form Ekaterina Makarova or Barbora Strycova. Looming in the third round is Petra Kvitova, who also has a difficult opener to deal with in the form of Anett Kontaveit. A repeat of the Toronto quarterfinals will ensue too in Lucie Safarova taking on Sloane Stephens again.

Elina Svitolina’s year just keeps getting better and better and as of writing, she has a 41-9 record to the season and has not lost a match at a Premier 5 event this year. Can that streak continue in Cincinnati? The Ukranian will play either fellow countrywoman Lesia Tsurenko or Anastasia Pavlyuchenkova (Pavs leads head to head against Svitolina 3-1) before a potential meeting with No.10 seed Agnieszka Radwanska. Svitolina will likely face Julia Goerges in the round of 16 than Radwanska though – Goerges has reached three finals this year and is the in-form player.

The last time they met Simona Halep was two points away from beating Johanna Konta and claiming the No.1 status; however it wasn’t to be. These two could meet again in the quarterfinals.

Johanna Konta’s Rogers Cup campaign ended pretty meekly with a three-set loss to Ekaterina Makarova in her opener. The Brit will want to get more preparation before the US Open starts and she will kick off her campaign against hard-hitting Oceane Dodin or Kiki Bertens. Dominika Cibulkova is the other seed in this section – the Slovak can’t get a break with the losses and it could continue with Ana Konjuh her first round opponent.

As opposed to Konta, Simona Halep’s Rogers Cup campaign has been successful so far and it seems like she just loves playing in Canada, having reached the final stage in 2015 and 2016 and is looking to do so too this year. The Romanian also does very well in Cincinnati every time and her draw to be honest is really a bed of roses of her. Starting with a qualifier, she is seeded to play Anastasija Sevastova which Halep always has her number. Peng Shuai could change the situation though; she plays Sevastova in round one and will look to ride on her good form to cause some upsets.

Thoughts on the draw: From the top half I like Pliskova to face Muguruza provided that the former beats Williams in a round three clash. Both Pliskova and Muguruza did well in Cincinnati last year and the conditions suit them both. Muguruza though has a caveat in Sharapova and I’m still considering for the second quarter…

Simona Halep is always a safe pick during the US hard court swing and it looks like I’m going for her to make the final again. The World No.2 is always so solid during this part of the year and I feel she will be motivated to try and get that No.1 ranking she keeps missing on. Konta could cause some problems though… For the third quarter I have no idea! I’m not so sure Svitolina can get accustomed to the Cincinnati courts so quickly coming from Montreal and Pavlyuchenkova (potential R2 opponent) will be a tough obstacle for the Romanian. Maybe a Goerges, Kvitova or Pavlyuchenkova could come out of that quarter…