Jelena Ostapenko is into uncharted territory after reaching her first ever Grand Slam quarterfinal – can she upset Caroline Wozniacki once again to reach the semifinals?

Overview: Jelena Ostapenko is into her first Grand Slam quarterfinal – surprisingly, it has come on the clay of the French Open! I was pretty convinced Ostapenko’s game was more suited to the hard and grass courts, but it seems like the Latvian is an all-surface player. Ostapenko had been coming into Roland Garros as one of the dark horses as she had produced fantastic results on the clay this year, first a final appearance on the green clay in Charleston, losing to fellow teenager Daria Kasatkina. She backed it up by qualifying successfully for Stuttgart and Rome, even winning the doubles title with Rachel Atawo in the former. Not to forget a semifinal run in Prague, where she beat her opponent she’ll be facing today, Caroline Wozniacki. In Paris, she has largely produced impressive displays to fend off Louisa Chirico, Monica Puig, Lesia Tsurenko and Samantha Stosur to reach this stage of the tournament. 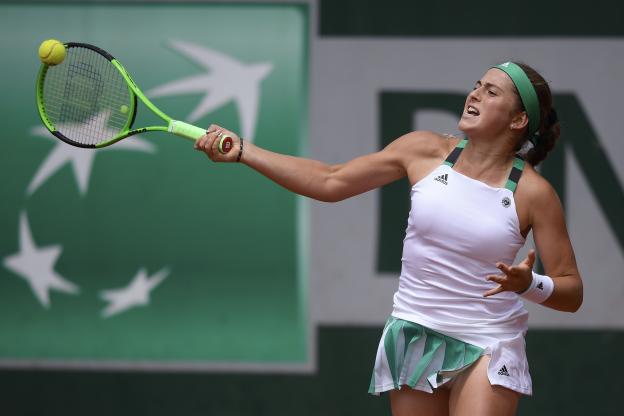 Talking about Wozniacki, as opposed to Ostapenko, she was coming into the tournament probably with less hopes. Her clay season had not gone the way it wanted to be, starting off with a quarterfinal in Charleston, falling to Ostapenko, before losing to the Latvian once again in the second round of Prague. Bad results on the dirt continued as she lost to Carla Suarez Navarro in Madrid, before withdrawing from Rome due to an injury. Entered into an extra tournament before the French Open, she retired from Strasbourg against Shelby Rogers who was up a set against her. Probably no one expected the Dane to make a deep run this week, as Roland Garros was her worst Slam, her best result was a quarterfinal in 2010. She has matched that this week though; with a tight win over Jaimee Fourlis, she came through Francoise Abanda, Cici Bellis and Svetlana Kuznetsova. The win over Kuznetsova was one of Wozniacki’s best displays of the year so far on clay, she was being aggressive with her groundstrokes and her drop shot was very effective.

.@CaroWozniacki is first through to @RolandGarros Quarterfinals!

Head to head: Ostapenko leads the head to head 3-0, two of their encounters have been during this year’s clay court season. The Latvian notched the wins in Charleston and Prague, saving a match point in the match in Prague.

Stat: This is Ostapenko’s first Grand Slam quarterfinal, as opposed to Wozniacki who has had eight appearances at this stage of the Slams!

Thoughts: To be honest, I felt Wozniacki should be owning this match-up, as Ostapenko can be very streaky at times and the Dane’s retrieving skills would be a factor as Ostapenko would start to miss. However, Wozniacki has always struggled with the depth and power Ostapenko produces and that would be a huge factor in this match if Ostapenko is on as she has been throughout this whole tournament. Wozniacki will need to find a way to disturb Ostapenko’s rhythm, some drop shots and moonballs will do her good. This match however is obviously Ostapenko’s biggest match of her career and she will have to control her nerves. Because of this, I’m going for Wozniacki, although Ostapenko has definitely the weapons to win this match.