Madrid is not even over yet and here comes another big tournament… the Internazionali BNL D’Italia in Rome! With eight of the Top 10 players taking part in this Premier 5 event, it is sure to be a cracker with full of surprises and upsets. Here I’ll break down the draw into four quarters.

The draws were clearly displeased with Mirjana Lucic-Baroni falling to Maria Sharapova in the first round of Madrid last week… This time, they could face each other in the second round where Lucic-Baroni has to get past Lucie Safarova and Sharapova faces Christina McHale. Safarova-Sharapova would be a cracker too.

Let’s not forget the top seed, Angelique Kerber, who is coming into Rome as the World No.1. Retiring from Madrid down 3-6 0-5 to Eugenie Bouchard, she is undecided to participate in Rome and if she withdraws there will definitely be a big shake up in the draw. But if she does participate, she will have a breather with a bye and a qualifier looming in the second round. It gets more difficult in the round of 16, with possible opponents being Safarova, Sharapova or Lucic-Baroni. Meanwhile, we have Simona Halep, Madrid finalist (and possibly champion) waiting on the other side of the quarter. Halep could face Stuttgart conquerer Laura Siegemund or big hitting Naomi Osaka in her first match, very dangerous for the Romanian. Last year after her Madrid trimpuh, she lost in her Rome opener to Daria Gavrilova so I’m not really sure Halep can progress that far in the draw. Players like Anastasia Pavlyuchenkova or Samantha Stosur could take advantage of that.
Semi-Finalist: Sharapova

Dominika Cibulkova failed to get past the third round in Madrid last week against Oceane Dodin… The Slovakian is really not producing the results this year and she really needs to step up right now as the grass season is approaching with many points for Cibulkova to defend. She starts off with either Ekaterina Makarova or hometown favourite Roberta Vinci, the former having beat Cibulkova twice this year. Projected third round opponent for Cibulkova is No.15 seed Kiki Bertens, but has a banana skin opener in the form of Monica Niculescu who has won their two previous encounters.

Svetlana Kuznetsova is also in this quarter; she’ll start off her Rome campaign with either Katerina Siniakova or Zhang Shuai. Madison Keys looms in this section; she’s only 3-4 in the season, but she was the Rome finalist last year and definitely knows her way arround the Terre Battue, beating Petra Kvitiova, Barbora Strycova and Garbine Muguruza along the way. With Kuznetsova just coming off her Madrid endeavours where she made the semifinals, and Keys not in her best form yet, any player in this section could make a deep run. 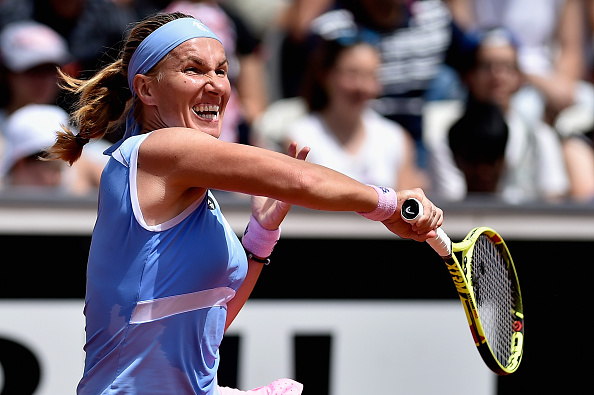 Even though reigning French Open champion Garbine Muguruza is in this quarter, I’m calling in an open section. A lucklustre performance against Timea Bacsinszky in Madrid last week stunned everyone with her lack of enthusiasm and shot-making. She’ll need to get off to a quick start quickly as she could face last year’s Roland Garros quarterfinalist Shelby Rogers in her opener. It doesn’t get easier from then on; Madrid finalist (or champion?) Kristina Mladenovic, Julia Goerges or Alison Riske are possible third round opponents.

Johanna Konta is another Top 10 player who hasn’t done well on the clay this season – after her Miami win, she is 2-3 on the clay this year. With barely any points to defend throughout the clay season, she seemed liked a prospect to be in the Top 5 sooner or later, but it hasn’t happened on the dirt. It could happen in Rome though; Venus Williams (who doesn’t really like the clay), Yulia Putintseva (whose level has dropped dramatically since St.Petersburg) and Monica Puig (who can lose to a World No.200 on any other day) are in her section.

Karolina Pliskova lost to Anastasija Sevastova in straight sets in the third round in Madrid. “I have no more expectations on clay,” she said after the loss. She really should not have any more expectations in Rome; she could face clay court specialist and former Rome finalist Carla Suarez Navarro in her opener. More clay court talents like Timea Bacsinszky and Daria Kasatkina loom in the  round of 16, a very difficult draw for Pliskova who has struggled on the dirt this year with a 2-3 record on the surface.

Now, what do you think of when Alize Cornet and Sara Errani’s names are placed together? Vamos, obviously! They will meet in the first round, with both players on their favourite clay, it’s bound to be a ‘Vamos’ encounter. The winner of this match would face No.8 seed Elina Svitolina, who won her third title in Istanbul but fell to Zheng Saisai in Madrid in which was a pretty disappointing loss. Svitolina was miles behind the baseline in that encounter and she really needs to get her aggressive game going if she wants to make some runs during the clay season. The other seed in this section, Elena Vesnina, has not been convincing at all after her Indian Wells triumph and things could get from bad to worse with Svitolina, Cornet or Errani (all  clay court players) looming in the round of 16.

Thanks for reading this preview, hope you enjoyed it 😃